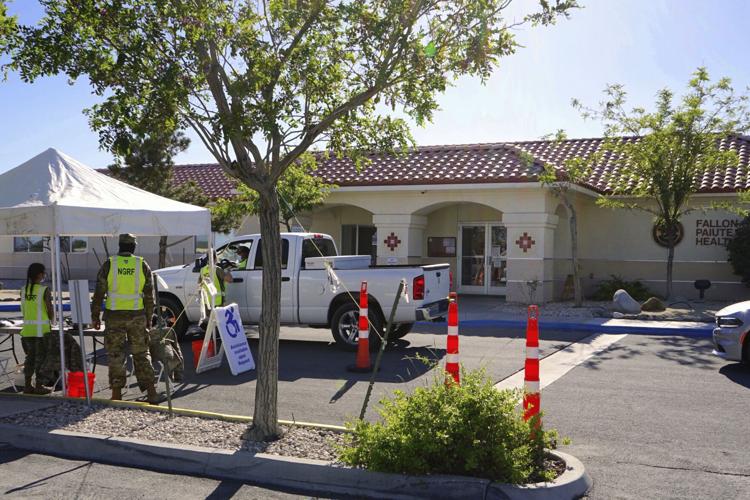 Members of the Nevada National Guard offer coronavirus vaccines at a mobile vaccination clinic held at a tribal health center on the Fallon Paiute-Shoshone Reservation and Colony on May 18, 2021 in Fallon, Nev.
AP Photo/Sam Metz

(Robert Davis) – Nevada Gov. Steve Sisolak said Friday his administration is seeking additional assistance from federal government “surge teams” to combat the rise in the COVID-19 Delta variant in the southern part of the state.

Surge teams are task forces put together by the White House to help local agencies provide additional testing and contact tracing to help contain outbreaks. They were announced late last week and one has already been deployed to Missouri, according to the Kansas City Star.

Sisolak said the decision to seek further assistance was made because of Nevada’s declining vaccination rate.

“This additional support from our Federal partners is necessary to assist in our outreach efforts and help meet the needs of Southern Nevada’s communities,” Sisolak added in a statement.

As of Friday, Nevada had a two-week positivity rate of 5.8%. At the same time, daily hospitalizations has increased every day since June 11, according to state data. On July 1, the most recent data available, 390 people were admitted to state hospitals for COVID-19 treatment.

Meanwhile, less than half of the agencies responsible for reporting COVID-19 data to the federal government are doing so, according to the Centers for Disease Control (CDC).

Clark County — home of Las Vegas — is seeing the largest increase in cases in Southern Nevada. Over the past two weeks, Clark County has averaged 267 new daily cases. Within the last 30 days, the county averages 247 cases per 100,000 residents as well.

As for vaccinations, Nevada Health Response reports that just over half of the state’s population has received at least one dose of a vaccine. Meanwhile, just 43% of the state is fully vaccinated as of July 1.

Amid the languishing vaccination rate, Sisolak said his office is working “around-the-clock with state agencies and local partners to coordinate robust vaccination efforts.”