Sisolak declares state of emergency in response to Caldor Fire 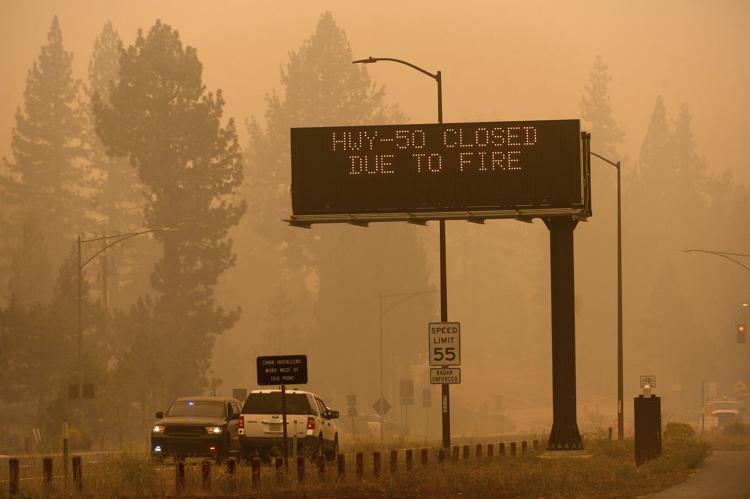 A sign in Eldorado County, Calif., warns motorists about the closure of Highway 50, which is shut down in both directions due to the Caldor Fire, on Friday, Aug. 27, 2021.
AP Photo/Noah Berger

(Robert Davis) – Nevada Gov. Steve Sisolak declared a state of emergency on Monday in response to the Caldor Fire burning in bordering California.

The governor’s declaration comes after local emergency officials in the California resort city of South Lake Tahoe ordered nearly 22,000 residents to evacuate. Officials expect the blaze to cross into Nevada in the coming days.

Declaring the state of emergency will allow the state to leverage additional resources from local partners and the federal government to fight the blaze.

“I would like to thank all of our brave first responders, local government agencies, and nonprofit entities who continue to go above and beyond to assist our communities during the Caldor Fire,” Sisolak said in a statement. “We will continue to use all our available resources to fight this fire and assist those in need.”

According to the California Department of Forestry and Fire Protection, the Caldor Fire started on August 14 and is only 14% contained to date. The blaze has consumed more than 177,000 acres over its 16-day lifespan.

The fire gained more than 20,000 acres overnight as rising humidity and winds pushed it closer toward Lake Tahoe, The Mercury News reported. The fire has also reportedly consumed more than 470 structures and caused five injuries.

The Nevada Department of Transportation was forced to shut down roads leading to South Lake Tahoe as thousands of residents piled onto Highway 50 to escape the blaze.

People who live on the Nevada side of the blaze are not under any evacuation orders yet. However, Douglas County officials told the Reno Gazette Journal that residents “should remain aware, and be thinking about evacuation” as the situation develops.