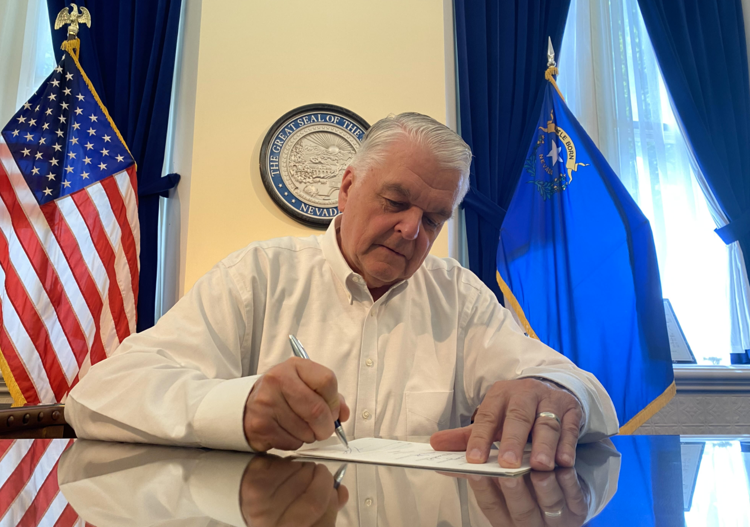 “From the start, we knew this legislative session would look very different than any other before in our State history, but I am so proud that we were able to create significant progress on our road to recovery for all those who call Nevada home,” Sisolak said in a statement.

Among the bills signed were Assembly Bill 495, which establishes an additional tax on businesses profiting more than $20 million per year. The revenue will be split between the state’s general fund and education funds.

According to the bill’s fiscal note by the Department of Health and Human Services Office of Healthcare Policy and Financing, the bill will increase state revenues by over a half-million dollars over the next biennium.

Sisolak said the bill would ensure that “dollars follow the students, rather than being connected to districts or schools.”

Business owners also got a boost as Sisolak signed legislation to sent over $100 million to small businesses. Of the funds, $50 million were made available through Assembly Bill 106, which directs the Office of Economic Development to make grants available for businesses that were severely impacted by COVID-19. The bill also allocates over $50 million for to support the Pandemic Emergency Technical Support (PETS) grant program, a program that helps small business owners upgrade their technology to comply with local restrictions and expand e-commerce sales.

Two industries in Nevada that suffered the most during the pandemic were gaming and hospitality. However, Nevada’s Economic Forum estimates that both industries will see a strong rebound in the fourth quarter of 2021, helping to lead the state’s economy out of its rut.

To help workers who lost their jobs in these industries, Sisolak signed Senate Bill 386. The bill requires business owners to offer jobs back to laid-off employees as well as establishes greater protections for workers.